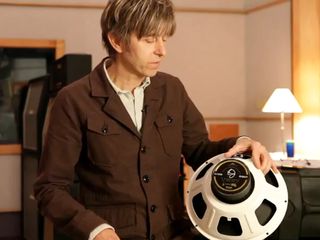 Any artist who calls an album Tones has got to be serious about sound. Eric Johnson is such an artist. He's been known to spend up to five years crafting an album, and true to form, he was just as meticulous when it came to developing his signature guitar speaker, the Eminence Eric Johnson Signature Series EJ1250.

Johnson worked with George Alessandro to design his signature guitar speaker, aiming to capture the characteristics of late '50s US models as well as late '60s British models.

The EJ1250 was introduced at Winter NAMM 2012, and in the above video, Johnson details and demonstrates his Eminence signature speaker.