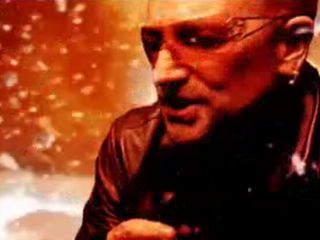 U2's new video is a corker

U2 have officially premiered their new video, Get On Your Boots, the first single from the band's upcoming album, No Line On The Horizon, and you can see it right now.

Directed by French filmmaker and artist Alex Courtes (who helmed the clip for Vertigo), it features the band performing in front of dizzying images of everything from naked women and fighter jets to volcanoes and explosions to you name it. There might be a kitchen sink or two in there somewhere - we have to watch again.

The Edge explains all

According to The Edge, "It's based around the idea that men have fucked things up so badly, politically, economically and socially that it's really time we handed things over to women."

Although they've made dozens of videos, U2 were nervous about this one. Says The Edge, "We had our doubts when we saw a rough cut - but the finished video is brilliant. Alex really nailed it."

We have to agree. It's a corker all right. The section where the lens cracks with Larry Mullen's snare hits? Love it. To see it in much better quality, head over to U2's MySpace page, and hey, come back and let us know what you think.