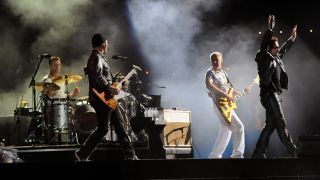 If you're a U2 fan, you might have noticed a gift in your iTunes playlist today - or maybe you haven't seen it yet, so go look. One of the big surprises during today's press conference in Cupertino, California, for Apple's launch of the iPhone 6 and the first Apple watch - perhaps the biggest surprised - was the announcement that the band's new album, Songs Of Innocence, was available free immediately on iTunes through October 13th.

U2 appeared at the press conference and performed the first album's first single, The Miracle (of Joey Ramone). Of the band's decision to release their long-awaited disc in this fashion, Bono said, "From the very beginning U2 have always wanted our music to reach as many people as possible. The clue is in our name, I suppose - so today is kind of mind-blowing to us.

"The most personal album we've written could be shared with half a billion people… by hitting send. If only songwriting was that easy. It's exciting and humbling to think that people who don't know U2 or listen to rock music for that matter might check us out. Working with Apple is always a blast. They only want to do things that haven't been done before - that's a thrill to be part of."

U2 have spent the past two years working on Innocence with producer Danger Mouse (aka Brian Burton), with assists from Paul Epworth, Ryan Tedder, and one of their longtime collaborators, Flood. "We wanted to make a very personal album," Bono told Rolling Stone. "Let's try to figure out why we wanted to be in a band, the relationships around the band, our friendships, our lovers, our family. The whole album is first journeys - first journeys geographically, spiritually, sexually. And that's hard. But we went there."