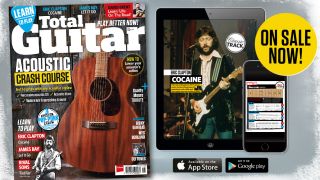 Buy a print copy of this issue

Get this issue for your iOS device

Get this issue for your Android device

Inside this month's magazine…

Cover feature
The Acoustic Crash CourseSummer's here, which means it's time to dust down that neglected steel string as we show you how to get to grips with a range of acoustic techniques, including percussive, acoustic blues, folk fingerpicking, singer-songwriter chords and more! We also show you how to get your acoustic playing its best by lowering the action.

Songs
TG is the only UK guitar mag to feature accurate song tabs. This month:

Ricky Gervais
We sit down with the king of cringe-comedy to talk about the David Brent movie, 'Life On The Road' and his love of guitars. Ricky was also kind enough to let us tab the title track from the film and its accompanying David Brent Songbook.