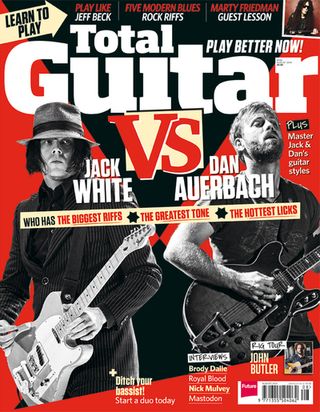 Total Guitar 256 is on sale in print, and digitally worldwide from today.

Get our latest issue for free with a 30-day free digital trial subscription for iOS and Android!

This issue, we're pitting two modern blues-rock guitar heroes against each other! It's well known that there's little love lost between Jack White and Dan Auerbach, but we're keeping it strictly about the guitars as we look at every aspect of Jack and Dan's playing, and decide who's the best guitarist.

Learn to Play/ How To
Marty Friedman Guest Lesson
Play like Jeff Beck
Riff Of The Month: Aerosmith 'Walk This Way'
Improve your fret-hand stretches
Master the Dorian Mode
Your first eight-string lesson!
How to start a two-piece band
Use tremolo
Make your guitar sound like a helicopter!
Replace your guitar's machineheads