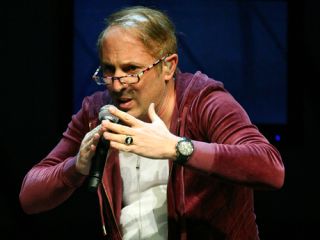 Tool/A Perfect Circle/Puscifer frontman Maynard James Keenan has been a vocal critic of illegal downloading over the years, and during an interview with the Oregon rock station 101.5 KFLY this week, he was asked to expound on the subject.

"I think part of the problem with most of that is just the foundation of respect or entitlement," he said. "I think 'entitlement' is probably the better word. I think, just in general, our society has gotten to the point where just you click a button, you get what you want when you want it. So until we get to a point where we realize you don't necessarily always get what you want when you want it, we're gonna have a problem. So it stems from there.

The singer added that "until somebody has actually written a check to record their own record and see everything that goes into it, they don't really understand that if you just take it… The current state of music, I'm sure there's a lot of creative stuff going on out there, but there certainly isn't — of course, I'm being nostalgic — but it doesn't seem like there's as much, creatively, going on, 'cause most people can't afford to do it."