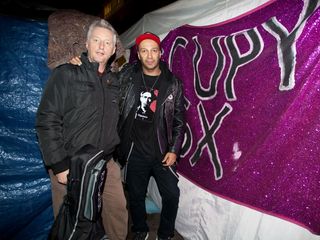 Rage Against The Machine guitarist Tom Morello has put out calls for a "GuitArmy" to join him at New York's Occupy Wall Street demonstration, due to meet in Bryant Park in the city later today.

Using his Twitter to get the message out, the guitarist said:

"I'm putting a new band together and ur in it. Our 1st rehearsal is tomm noon @ Bryant Park in NYC. Looking for about 10,000 guitar players [sic]"

Later the guitarist revealed that fellow songwriter Ben Harper will be joining the protest, tweeting:

"Hellooo GuitArmy! BEN HARPER will be joing us in the march and concert tomm! Bryant Park! Noon! Nyc! #MayDayThrowdown [sic]"

The Rage man also called for any other musicians in the area to get involved, asking everyone from "marching band veterans [to] pots and pans bangers" to come and show their support for the global protest against income inequality.