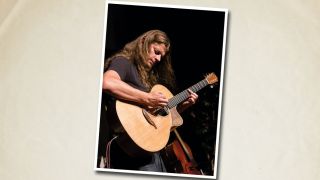 Acclaimed internationally as a virtuoso on the acoustic guitar, Thomas Leeb has never lost the urge to experiment with the instruments he's playing in order to find the perfect fit for the music he has in his head. These days, his touring guitar ensemble includes a couple of baritone guitars, including the first Lowden baritone ever made.

We asked him what it was that attracted him to the instrument in the first place. "I was already tuning down halfway there, and in some cases all the way there, so it seemed only natural. It's just a little deeper - I'm a closet bass player anyway," he laughs. "Whenever I had the chance to pick one up, I'd be curious…"

The scale length on a baritone tends to vary between manufacturers, but it's generally longer than that of a standard acoustic and so a little bit of recalibration is always necessary when transferring pieces from a straight acoustic.

"One baritone I played had a ridiculously long scale length," Thomas recalls. "Stuff that would otherwise be no problem in regular tuning ended up being difficult, in that I had to refit what I was doing. There'll always be some of that, of course, but if you really have to restructure what you're doing with the left hand, then it gets tricky."

The other marked difference is string gauge. With tunings that drop down to B or even lower, it's obvious that bigger is better.

"The strings that work best for me on a baritone are John Pearse 0.017 to .0.70s," says Thomas. "The second string is wound and I don't know why that is important, but to me, it really is." Having a .070 as your bass string is going to allow some considerable flexibility with tunings. We wondered which Thomas has experimented with.

"I tried DADGAD in a bunch of keys - well, DADGAD but it's with A, or sometimes A#, in the bass," Thomas remembers. So that would give you A E A Bb E A?

"Yes, but to me it's still DADGAD - that's just how I think." he concludes. "Then - relatively speaking - there's open D and open D with E on top, D A D F# A E. The Bach Prelude that I did on my album was on baritone and it would have been CGDGAD taken down to A."

The next question is that of amplification and EQ for live performance - if you're going down as far as A, you need something quite robust. "I use one of those soundboard transducers on my guitars. I'm actually debating whether to go back to piezos under the saddle, maybe," muses Thomas.

"Everything I do goes through a ridiculous amount of EQ. I go through a Motu UltraLite-mk3 at the moment, which has a five- or seven-band EQ. I don't use all of those, but they are fully parametric and can home in exactly on the trouble spots.

"If you cut it too much, you'll lose some of the true voice of the guitar, therefore you have to find a good measure of how much to cut and how much not to cut. I've done this for many years and have learned a lot, but I still have a hard time speaking about it because I feel like I don't know anything at all!"

So if someone was considering a switch to baritone, what would Thomas say is the first thing they should look at?

"Maybe their mental health!" he jokes. "In a way, it's a different instrument. It's like 12-string guitar; nobody switches to 12-string and then says, 'I'm going to burn my six-string and I'm only going to play 12-string now.' But I think everyone should have a baritone at home. I mean, that would be wonderful."

It's arguable that the baritone is enjoying another bout of popularity, but there haven't been any signs of a universal uptake so far. Usually, trends begin with an iconic recording or performance - so has Thomas found any pieces that encapsulate everything that's good about owning a baritone?

"Andy McKee has a song that I love on the baritone," he says. "It's actually from his first record. I know Drifting is the big song, but I initially fell in love with a tune called Heather's Song before he got famous. It's just that Cadd9 chord he plays around with. It's in [dropped] standard tuning, as well."