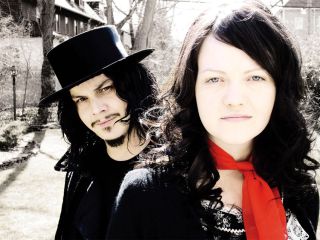 Jack and Meg come to TV this Thursday

The White Stripes are reuniting to play the final episode of Late Night With Conan O'Brien. The 20 February performance will be the first time the duo has performed live since the summer of 2007.

The White Stripes and O'Brien have a long history - the band has performed on Late Night many times, including a week's worth of shows in 2003 - so they're the perfect group to close the show's farewell episode before O'Brien moves to Los Angeles to take over The Tonight Show in June.

Significantly, that Jack and Meg White are playing live is a signal that Meg has recovered from the 'acute anxiety' that forced The White Stripes to cancel US and UK dates in 2007.

In the time since, Jack White has busied himself with The Raconteurs and assorted musical projects, such as recording the theme to the latest James Bond film, The Quantum Of Solace, with Alicia Keys.

No word on what song (or songs) the band will play for Conan's last show, but MusicRadar has a suggestion: