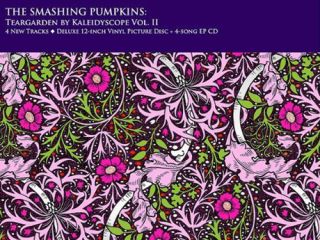 The Smashing Pumpkins have announced tomorrow, Tuesday 23 November, as the street date for the release of their next EP, Teargarden By Kaleidyscope Vol. II: The Solstice Bare. It's the second in a series that will ultimately complete a 44-song project, from which songs are being released online, one at a time for free (with four-song physical EPs being issued along the way).

Actually, head Pumpkin Billy Corgan is giving fans a little something extra with this new set, as The Solstice Bare contains not four but five tracks. There's The Fellowship, Tom Tom, Spangled and Freak (the latter two you can hear below), but there's also an unreleased B-side called Cottonwood Symphony.

If you choose to purchase a physical copy of The Solstice Bare, the 12-inch box is a metallic/foil wallpaper motif designed by Lenny Kravitz's firm, The Flavor Paper Co.

As for what the future holds for the remainder of Teargarden By Kaleidyscope, Corgan told Mixdown magazine, "I have more than enough written, but I would say probably half, or less than half, is worth recording, because I'm still evolving with the quality level and maybe what I'm trying to say.

"Now that the band has really come together as a unit, I'm looking at the material in a completely different way. We're sort of back into a dynamic rock outfit. So that opens up my mind. It brings the musicianship back into the equation in a way that maybe it hasn't been in a while."