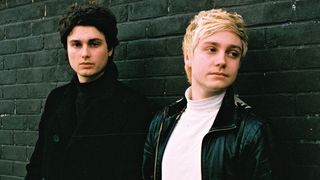 If you believe modern pop music lacks true 'Beatles in Hamburg' grit, The Ruen Brothers could restore your faith in rock 'n' roll.

The Scunthorpe-rooted siblings played their first gig aged 12, going on to notch up 1,000+ shows. "We were playing [covers in] pubs and clubs around Scunthorpe week-in, week-out," says frontman/ rhythm guitarist Henry Stansall. "I remember singing House Of The Rising Sun - so I'd probably knocked it up a few keys!"

10 years later, and two extremely promising singles, Walk Like A Man and Aces, have led to them signing with Island. There's an intimate knowledge of their 60s forbears, melding early Stones licks, Roy Orbison vocals and shades of Scott Walker's darkness.

Impressively, they record everything bar drums in their London bedsit, armed with a Fender Deluxe Tele, an Ovation 6778LX, a laptop and very little else. "We set up a mic inthecupboardandthendampit down with some towels," explains Rupert, the younger sibling and lead guitarist. "I use a Fender Tweed Blues Junior. I've never used any pedals, so it's just the amp's natural distortion."

"It's a longer process for us than other artists," adds Henry, "because we record, produce and write everything by ourselves. We don't have someone come in to help us whip a track into shape in a couple of days."

Nevertheless, Henry reckons we can expect an album in early 2014. They've just got to figure out how to get that sound again... "To remember the recording techniques we did for Walk Like A Man and Aces we have to think back to six months ago," says Rupert. "It's like, 'Err, where did we place the microphone in the bedsit to get that sound!?'"