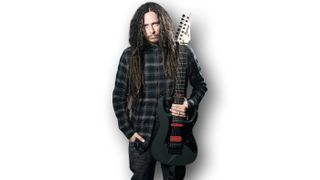 Listen to Munky's playlist on Spotify

"I had been listening to my older brother's metal albums as a kid. I paid more attention to the vocals until I heard Running With The Devil and Eruption. I couldn't comprehend that it was a guitar making those sounds. I didn't know what it was but I loved it and I had to fi nd out how to make those crazy, cool sounds.

The first song I learnt… Mary Had A Little Lamb

"I learned to play that song on an acoustic. I had a guitar teacher who was showing me how to read the notes and I was thinking, 'This is so fucking boring! Why doesn't this sound like the records I'm listening to?' So I went and told my dad I wanted to play electric guitar and I ended up buying Head's [fellow Korn guitarist Brian 'Head' Welch] old Peavey Mystic. It was an ugly guitar, it looked like a wisdom tooth or something."

"There are so many riffs that I wish I had written, but the one that comes straight to mind is Bulls On Parade. But then number two and three that come to mind are Crazy Train and Rock You Like A Hurricane."

"And then that was one of the first songs that I learned! I must have played that song a million times in my life. Learning to play that was just so much fun."

The song I'm currently listening to… Reincarnate - Motionless In White

"I was just listening to the Motionless In White album. We're on tour with them at the moment and I really like what they're doing. I really like Bring Me The Horizon as well. I like how they are evolving into something new with each record."

"That one has a lot of the elements that we're known for. It was the melodic chorus, the heavy middle section and an opening riff is super heavy. I love that song."

The song I play when trying out new gear… Clown - Korn

"There's not one particular song that I always play, I can usually never think of anything to play when I'm trying out gear. But I guess I will usually play some of the older Korn stuff. I'll often play the riff from Clown. That one was slide and palm mutes, it has a little bit of everything.'

"Our Life Is Peachy album is 20 this year so we've just added Good God back into the set list. That song goes all the way from one end of the neck to the other. It's a difficult riff and I have to stand there playing it over and over until the middle part. There's no room for mistakes on that song."

"Just because it has this cool, off-time verse and the vocal melody is insane. It has a killer intro as well."

Korn's new album, The Serenity Of Suffering, is available now on Roadrunner Records.