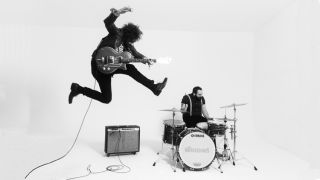 "There's a certain type of magic that comes out of doing something on the spot."

Two-pieces are taking over. In recent memory we've had Derby duo Drenge, the world-conquering Black Keys and arty riffers, That F**king Tank.

Blues rock 'n' rollers The Graveltones consist of two London-dwelling Australians who met at the capital's instrument Mecca, Denmark Street. "I was working in Wunjo Guitars and Mike [Sorbello] was working over the road in the drum shop," explains guitarist Jimmy O.

"I just went in and we got talking. The next thing we knew we had a rehearsal, and a couple of days later, played at the 100 Club."

"I split my signal, so I'm using an Orange bass amp and a Fender Twin," says Jimmy. "I can boost the highs for solos through the guitar amp, rather than using the bass amp as well - it seems to work."
Now the band's momentum's building: they've just released a deluxe version of debut album, Don't Wait Down, and the festival diary is filling up rapidly.

"We just try not to over-think things," concludes Jimmy. "There's a certain type of magic that comes out of doing something on the spot."