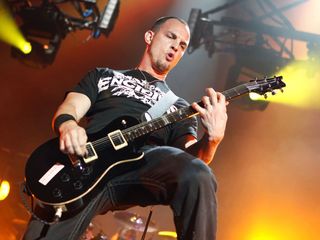 Yesterday evening Mark Tremonti, the Grammy-winning songwriter and guitarist behind US rock giants Creed and Alter Bridge sat down for a one hour Twitter Q&A over on the new MusicRadar Guitars feed (@MRadarGuitars). He certainly earned his keep, managing to answer over 50 fan questions during the takeover!

Here are all the questions and answers, including tidbits on his tour plans with solo project Tremonti, his thoughts on Myles and Slash, the next Alter Bridge album and, of course, lots of guitar talk…

Mark Tremonti has just released his first ever solo album, All I Was. Check out the video for lead single You Waste Your Time below and head here if you want to buy a digital copy of All I Was.

@lara_not_croft: If you were stranded on a desert island and could only take one book, one album and one movie, what would they be?
Mark: That's a tough one! Probably Bob Marley's Legend and the movie The Warriors.

@TenaciousBe: Mr. Mark, how we doin?! I'm sure the question on everyone's mind - Tremonti Project touring, any updates?
Mark: Yes we are putting together a Tremonti project tour. It's in the planning stages right now.

@steveavigne: Mark, what is your favorite scale type and what would you say is your most used, go-to scale?
Mark: My favorite scale has to be the Pentatonic scale.

@udrummer: What about a European tour?
Mark: We are definitely hitting the UK and just might hit other European cities.

@justinwhill: Have you any idea yet of when you want to start the USA Tremonti tour?
Mark: We are starting to tour immediately after our current Creed tour.

@SuperFast3000GT: Mark, when will the rest of the live recordings be released? I'm dying to see them!
Mark: Not quite sure yet, we want to focus on the album for a couple months first.

@BrendanLMusic: Hi Mark, About two months ago I formed a band and I was wondering if you have any tips for first concerts?
Mark: Just try to have a great time!

@JoshuaHouston4: What effects pedals are you using on tour?
Mark: I use my Morley wah, T-Rex phaser, Dunlop uni-Vibe, a Tube Screamer and a T-Rex Replica.

@Andy_Sivi: Hi Mark, how are you? If you come in Italy, you come in Milan? (sic)
Mark: Sure hope so!

@colemaund: Mark will you be coming close to Atlanta, Georgia or Montgomery, Alabama on your US tour?
Mark: I believe Atlanta will be on the tour schedule!

@garcia1dallas: How do you practice singing before you do a show? Is it different between your solo shows and AB/Creed?
Mark: I don't have a routine quite yet. I just warm up by singing some of the easier stuff first.

@GuitarGuyTX: Will you be making a second instructional DVD with some of the All I Was songs on it?
Mark: When I find the time I would like to teach my favorite parts of the All I Was record.

@ConnollyMatt: Mark how does it feel going from lead guitarist to frontman?
Mark: It's been a fun challenge!

@HayleeRoebuck: Did you always know that you were gonna be a musician/guitarist?
Mark: I always hoped and worked hard at it.

@MrsDJAshba: Hey Mark! What is your favourite song off All I Was?
Mark: Not sure which is my favorite. My favorites to play are Wish You Well, So You're Afraid and The Things I've Seen.

@ItsSuperRob: Would you like to include any slower songs that are similar to Watch Over You and In Loving Memory on the next AB album?
Mark: You just never know until you start putting it all together.

@Heedcase: Hey Mark, I am holding off buying a ticket to go see Slash and Myles in the UK. Is Tremonti coming to Scotland ??
Mark: Not sure yet.

@Tkf530: Hey Mark, will Alter Bridge be releasing a new album soon? I love them!
Mark: We will start putting it together at the end of this year.

@HappyHogJens: Hey Mark! Why is it that there are so many songs you never play live with Alter Bridge? Like Show Me A Sign and Zero?
Mark: We have actually played those songs, just not in every set.

@BradFletcher5: I've got a question for Mark, I've been playing guitar for two years, but I have trouble with playing solos. Any tips?
Mark: Practice by learning some of your favorites.

@StuMarlow_: Other than Dimebag, who are your main influences?
Mark: I have too many to list, but some of the main ones are: Metallica, Celtic Frost, Megadeth, Testament

@DannnyyBoiii: Mark, what is your favourite song that you've written spanning your entire career with Creed, Alter Bridge and your solo work?
Mark: My favorite is Blackbird.

@StuMarlow_: Are you going to be touring the UK and do some kind of signing/meet session in the midlands?
Mark: Not sure , we are still planning.

@morley1976: Hey Mark, you are the reason I play a PRS - they're awesome. Which guitar is your favourite you have ever owned?
Mark: Thanks man! My favorite is my Charcoal Burst signature model.

@sumanthAB: Hey Mark! Hope you're good. What's the most important factor to get a good guitar tone?
Mark: It's mostly in the fingers.

@creedfeed: Mark, what is your favorite Creed song of all time?
Mark: It used to be Faceless Man but now it could be Time or Say I.

@78ooosh: Hey Mark, All I Was is awesome. Is there another album in the pipeline?
Mark: Thanks a lot! I'm always writing new stuff.

@Jstark427: When writing songs, how are you able to write fresh and unique chord progressions without rehashing previously written ones?
Mark: I just experiment and try not to repeat myself too often.

@MartyJLogan: Question for Mark cause I'm at work later. Is there a tab book for All I Was coming out?
Mark: We plan on releasing one eventually.

@audomatik: Mark, how did you first meet Garrett? His drumming is amazing!
Mark: I met Garrett after he auditioned for the band Submersed.

@StanLSU: When you tour for your solo album, are you going to only play the songs on the Tremonti album?
Mark: We will probably play a cover or two.

@BedeschiPetruz: Are you writing new songs for Alter Bridge? Are you coming to Italy with your solo project?
Mark: Always writing and I sure hope so!

@Fishin_Lakitu: Will your solo tour be a headline tour? I'm not sure if your bro was referring to UK or not when he tweeted about Slash…
Mark: The solo tour will be a headlining tour in the States and not sure yet about Europe.

@Maddie15Taylor: You boys planning on playing any shows near Dallas/Arlington area?
Mark: The only confirmed Texas show so far is San Antonio. I'm sure Houston will be on the schedule as well.

@immy2x: What is your favourite song in general and favourite to play live from One Day Remains?
Mark: In Loving Memory is my favorite off of One Day Remains. Metalingus is the most fun to play.

@PereraDinal: Hi Mark! Is there any possibility of Alter Bridge coming to Sri Lanka if you guys do an Asian tour?
Mark: Always a possibility!

@Melillo_NYR: Did you catch a show of Myles with Slash yet?
Mark: I've been to two shows and I was blown away!

@Christo23218120: Hey Mark, I hope Words Darker Than Their Wings is on the the next setlist for AB!
Mark: I hope so too.

@TremontiAustral: Is Tremonti coming to Australia?
Mark: We just might, sure hope so!

@StanLSU: What guitar instructional video did you use the most growing up?
Mark: My favorites early on were Paul Gilbert's.

@jmanforeva: Any chance of bringing the Tremonti project to Houston? We have mad love for you down here!
Mark: That's the plan!

@crashtest133: Which AB album would you like to play in its entirety one day?
Mark: Blackbird is probably my favorite AB album.

@Ellie94_: Hi Mark! If you couldn't play the guitar any more which instrument would you chose to play?
Mark: I would probably learn to play the drums and the piano.

@AtreyuGin: Aside from PRS guitars? Is there any other brand of guitar that you are using?
Mark: I only use PRS guitars in the studio and live. I also love Fender guitars, I have a few Strats and Teles.

@_AlexLaz_: How many hours a day did you use to spend to improve your technique?
Mark: Sometimes I would play as much as possible. Most of my time goes into songwriting though.

@natashanicoleuk: Mark, how much are fans important in your career, and do you think it would be possible to see you in Italy with your project?
Mark: I wouldn't have a career without my fans! We definitely want to come to Italy.

Mark: Thanks for all the great questions everyone, hope to talk again soon!

@MRadarGuitars: That's your lot guys, thanks for all of your questions. And special thanks to @MarkTremonti for that mammoth Q&A effort!

Buy Mark Tremonti - All I Was (digital)