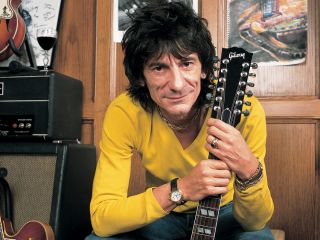 Ron Wood could still be a Face

Earlier this year it looked as though The Faces reunion was full-speed ahead...until both Rod Stewart and Flea (rumored to be on board as bassist) said, "WTF? We don't know what you're talking about."

Now if looks as if the reunion could be back on, but if it happens, if won't be a full-scale tour or album project, as was originally talked about.

According to keyboardist Ian McLagan, who spoke to Billboard, the latest idea is that guitarist Ron Wood, drummer Kenny Jones and McLagan do "a couple shows and film it. Whether Rod (Stewart) wants to do that...I'm hoping he'll be into that 'cause it'll be such a lot of fun. It's what the three of us would like Rod to agree to."

McLagan said that The Faces, with Rod Stewart's touring bassist, got together during November in London to play for three days in various configurations. McLagan described the sessions as "really, really great."

The following month word leaked that the group would tour, but with Red Hot Chili Peppers' Flea on bass, and that there would also be a new Faces album - the first since 1973's Ooh La La.

In January both Flea and Stewart denied there would be a Faces tour.

McLagan said that Wood plans to sell Stewart on the latest idea. "I'll get a call eventually, and maybe we'll do something in June or July," McLagan said, " 'cause I don't want to do anything next year. I'm not gonna wait again. It's either gonna be this year...It's now or never! I've got my fingers crossed, but I'm not going to waste energy trying to make it happen. I've worked for 30 years trying to make it happen. It's now in the lap of the gods - or the hands of Rod, maybe."

As for Ron Wood's much-publicized alcohol problems, McLagan said the guitarist is in "great shape...and good spirits" (no pun intended - it means he's not currently drinking).

"He slips but he stops," said McLagan. "He's finding his grace, and it's a struggle. He's trying really hard."

So maybe The Faces should call their reunion Nobody Walks Into A Bar.