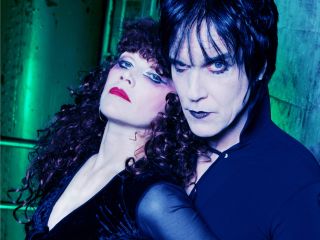 The Cramps' Poison Ivy and the late Lux Interior

The Cramps' frontman Lux Interior died in a Glendale, California hospital on 4 February. The singer of the influential New York voodoo punk band was 60.

Interior, whose real name was Erick Lee Purkhiser, passed away due to a previously-existing heart condition.

The Cramps were formed by Interior and his wife, guitarist Poison Ivy, in 1973. Having emerged from CBGB's New York punk scene, Interior was known for his wild live performances, reminiscent of Iggy Pop.

"Lux was a fearless frontman who transformed every stage he stepped on into a place of passion, abandon, and true freedom. He is a rare icon who will be missed dearly," The Cramps' publicist said in an official statement.

The Cramps remained active throughout the past three decades, with Interior and Poison Ivy constants in an otherwise changing lineup.

Here are The Cramps performing Tear It Up.