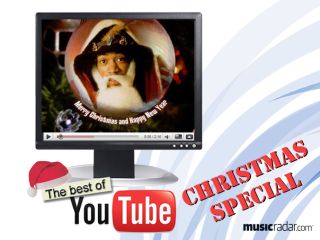 It appears that Santa has let Jimi take over...

It's day 10 of MusicRadar's 12 days of Christmas, and we've already kept you enthralled and appalled in equal measure with the best and worst Christmas songs of all time.

You can always count on the YouTube community to deliver and we've compiled this special festive collection of killer clips to allow you to while away those last few hours of office tedium before the holiday season really kicks in.

Go on, take the phone off the hook and check out these clips...

Bear with me on the title here - it's not entirely serious. Well, actually, it's not serious at all: taken from British comic Peter Serafinowicz's show, here's a sketch of Ringo Starr remembering sessions for an unreleased McCartney song. Spot-on impressions and full of Christmas cheer to boot. Chris Wickett

The Walkmen - No Christmas While I'm Talking

It's like a slow and painful relationship - what's not to like!? Ok, it's not particularly festive (a cheating partner can cheat all year round) but neither is Jona Lewie's Stop The Cavalry. This song - like the rest of its parent album Bows And Arrows - is epic, with drowsy vocals a plenty. And, just like Christmas, it's followed by the equally brilliant New Year's Eve six tracks later. Genius? Yes. Tom Porter

Singer/songwriter Aimee Mann will be hosting her third annual Christmas show this year, and this clip sees her attempting to persuade Ben Stiller and Will Ferrell to participate. One suspects that she watched a fair few episodes of Curb Your Enthusiasm before filming this, but that's no bad thing, obviously. Ben Rogerson

Sadly there's no video footage of everyone's favourite spaceman from planet cool feeling his way through this seasonal medley. However, tapes of this Band Of Gypsys-era studio jam leave us with 7:22 of Hendrix toying with his Stratocaster on the edge of feedback and improvising around the melodies. And it's mostly great stuff. Chris Vinnicombe

Why not learn to play a carol to please by-passing friends and relatives? This simple-but-effective video lesson from Lisa McCormick shows how just how to play Good King Wenceslas. Or there's Silent Night, too. Michael Leonard

As long-time REM nerds will know, The Vince Guaraldi Trio's gorgeous Christmas Time Is Here from A Charlie Brown Christmas is the festive bomb. YouTube inevitably coughs up a gazlllion variants, from heavy metal makeovers to the cast of Scrubs turning up. However once you've waded through those, try this tutorial played by Saint Nick himself. Okay, our Santa is a bit annoying but for one week only, let's ditch the cynicism and spread the love. Mike Goldsmith

Even if you're a Scrooge, this fun-filled video from the early '80s can get you right in the holiday mood. Hall & Oates (the latter sporting his crime-fighting moustache) display solid acting chops as they exchange presents (royalty checks?) on Christmas Eve. They're even joined by members of their band, complete without a cross-dressing grandma guitarist in the form of GE Smith. And really, isn't that what Christmas is all about? Joe Bosso