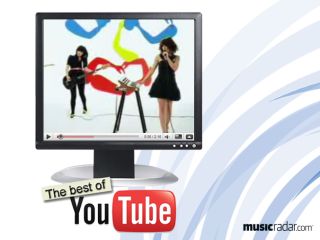 This week, see Little Boots in her old band (yes, of course there's a mini-synth), an armless busker, and Polly Harvey singing accompanied by guitars played with various kitchen implements. It's all good...

Victoria Hesketh is heading for success as Little Boots, but her current shot at fame isn't her first. She was previously part of Leeds-based three-piece Dead Disco, singing and playing her now-trademark synths. Sadly, we couldn't find a clip of her on Pop Idol, which she auditioned for when she was 16. Ben Rogerson

Claude plays The Police's Message In A Bottle

I've seen countless drummers attempt this song, but few play it as smooth and put their own spin on it quite like Claude from Switzerland. Watch how he goes from matched to traditional grip - great. He gets a little busy at times, but man, he owns those drums. Joe Bosso

If last week's news re iTunes Pass leads you to believe la Mode have gone all breadhead, this fragrant promo will make you think again. From feted indie director Patrick Daughters, this is Saw-meets-Top-Gear (kinda) soundtracked by a song that promises much for April's Sounds Of The Universe. Trivia time: the bloke in the car is Julian Gross, drummer from ace lo-fi noiseniks Liars. Lucky him. Mike Goldsmith

The Rumble Strips in the studio with Mark Ronson

Behind-the-scenes in NYC: it kicks off with a voice-over of an interview with the very American presenter Matt Pinfield of RXP Radio. This is what he says: "so you guys are from 'Devon' originally, is that right? So how far is 'Devon' from London?" Tom Porter

Polly Harvey and John Parish have a second duet album, A Woman A Man Walked By, out on 30 March. Here they are from back in 1995. Poor-ish quality video but Parish plays guitar with a brush, fellow guitarist Joe Gore with a knife. Maybe they'll grout and paint the bathroom later? Chris Vinnicombe