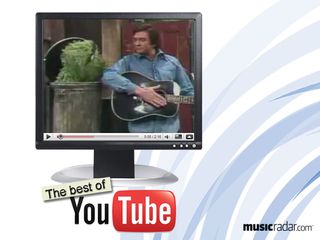 The Man In Black and The Thing In The Bin: Cash and Oscar

The late and oh-so-great Johnny Cash would have celebrated his 77th birthday yesterday - so in his absence, MusicRadar has decided to celebrate for him with a classic clip of the Man In Black's legendary appearance on Sesame Street.

Also thrown into the festivities is a spot of jaw-droppingly tight live funk (with keyboard bass!), some Chinese bluegrass and a bit four-necked guitar madness...

Blur's Graham Coxon is Freakin' Out

Blur's 2009 reunion is being celebrated, but it means an end - for now - of Graham Coxon's mercurial solo career. I like this. Geeky-voiced man on sofa, Les Paul Jnr, flurry of powerchords and hammer-ons, and an excellent lyric of "grooving yer stink on a Fender bass". It's a lo-fi charmer. Michael Leonard

As they release their new album, U2 are, of course, the biggest band in the world. Here they are making their first US national appearance when they were still hoping to have a chance. Two great numbers - Bono goes into the studio crowd - and an interview. And they're so well behaved! Joe Bosso

Thanks to plug-ins such as GForce's M-Tron Pro, Mellotron-style sounds are now easily available in software. However, this video proves that it's possible to build your own miniature hardware version using a good old portable cassette player. If you want to have a go, check out the creator's website. (Via Synthtopia) Ben Rogerson

Guitar? Check. Banjo? Check. Mandolin? Check. Standard bluegrass fare, I'm sure you'll agree. Add a liuqin, pipa, sanxian and a ruan, however, and we've seriously moved up a league: hello, Chinese Bluegrass. Or 'Redgrass', as it's been renamed by the Red Chamber group. Genius. Tom Porter

MusicRadar never needs an excuse to feature Johnny Cash (although it would've been his 77th birthday this week, fact fans) but rather than our now-traditional linking to that video, we thought we'd show The Man In Black's lighter side. Here's 'Johnny Trash' duetting with Oscar The Grouch on singing Nasty Dan. And if you think Johnny's gone soft on us, just check that snarl at 1m16s and his cheery farewell to Oscar. "Have a rotten day" indeed… Mike Goldsmith

In the spirit of our round up of the 14 most outrageous guitars on the internet, here's a man for whom the phrase 'less is more' has never existed. There's a nice cameo from Batio's Nitro bandmate Jim Gillette too. Chris Vinnicombe