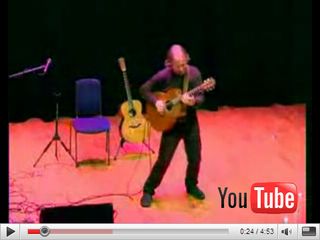 Every week, we, the MusicRadar team, submit our own personal favourite music videos and clips on the net. Some clips we really like, others are simply comedy classics or oddly intriguing. But all are worth watching…

Jimmy Page shows Aerosmith how to play Immigrant Song
"A rehearsal for a gig at London's Marquee club, 20 August 1990." JB

An 11-year-old girl plays Rush's YYZ on keyboards
"When I was 11, I did a pretty mean version of Proud Mary at my school talent show. Thought I was pretty cool. Uh, this girl definitely has me beat." JB

Biz Markie: Just A Friend
"You can find live versions, 'screwed and chopped' versions and even versions with snowboarders doing karaoke. However at Radar Towers, this original video remains the definitive old school statement. Anyone else remember Ego Trip? Ah, them's was the days…" MG

Man pays $28,000 for a guitar lesson from AC/DC's Angus Young
"I bet Jimmy Page is cheaper than that!" ML

'Young boy' queues for Oasis album
"Actually, it's Mike G as Tom's off getting married. We chose some things we thought he'd like. Hope you dig, married boy. Oh, this is brilliant btw - Pete Doherty, fresh faced, intelligent, cocky… What could go wrong? His choice of record for starters…" 'TP'

Captain Beefheart: Electricity
"And for Tom's second 'choice', we've gone for a slice of prime Beefheart. This live video is the good Captain in full live freakout mode. Wanna learn Electricity? Head here for someone making a half decent stab of it. Want more Captain? Watch this!" 'TP'

Bert and Ernie do gangsta rap
"It's a Sesame Street special for me this week. Thanks to some clever video editing, we can start by watching Bert and Ernie getting gangsta on our asses and covering M.O.P.'s Ante Up." BR

"1234 - monsters walking 'cross the floor"
"And here's the rather wonderful Feist taking a break from flogging iPods to teach America's kids how to count." BR

Solo debut for Yeah Yeah Yeahs singer
"Yeah Yeah Yeahs' Karen O has a side project: Native Korean Rock. Catch one of the first videos here; it's a whole new sound to her day job and is really quite nice." JS

Acoustic ace Leo Kottke
"Leo once said his singing sounded like, 'geese farting on a foggy day'. Fortunately, he doesn't sing in this clip." JU

Joe Bonamassa plays with Danny Gatton
"The thing is, Bonamassa is just 12." CV

The Bad Plus cover Flim live
"A beautiful cover of Aphex Twin's original, featuring the mighty Dave King on drums. The Bad Plus too do an out-there cover of Smells Like Teen Spirit - check it out." CW