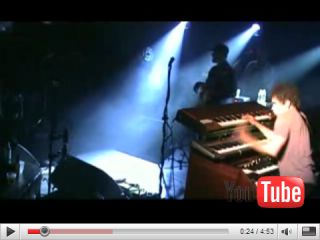 Ever week, we, the MusicRadar team, submit our own personal favourite music videos and clips on the net. Some clips we really like, others are simply comedy classics or oddly intriguing. But all are worth watching…

The Incredible One-Note Guitar Solo
"Otherwise known as feedback. I hope this kid doesn't think he reinvented the wheel. Neil Young's made a career out of this." JB

Drumming in the middle of soccer battle
"This is called dedication... it's also what happens when you have a small apartment and nobody lets you practice. Hey, we've all been there." JB

Mark Ronson and Wiley: Wearing My Rolex
"Ronson reclaims his hip hop cred while on tour with Jay-Z by regularly bringing Wiley on for 'that' song. Is it better than the Hot Chip/Wiley version at Glasto? You decide." MG

Kiss vs The Phantom
"Whether you spring for the bootleg or watch it via YouTube (it's in ten parts starting here), this 1979 'crossover' film is just bonkers. Start here with the promo then fill yer (platform) boots." MG

Flight Of The Bumblebee… at 320bpm
"If you love speed-of-light shred guitar, you will enjoy this video. If you hate shred, you will despise it even more. Your respect has been demanded; cough it up." TP

Arcade Fire do Guns Of Brixton in Brixton
"Megaphones, trombones, violins, double bass and a hurdy gurdy playing in a deserted corridor of Brixton Academy. And it's only a scaled down version of the live show - unashamedly weird/brilliant." TP

Scratch the movie - watch it in full
"This fabulous 2001 documentary charts the history of turntablism from the 1970s to the present day. If you haven't seen it yet, set aside an hour and a half this weekend. You won't regret it." BR

Delia Derbyshire at work
"Let's celebrate the discovery of a lost Derbyshire dance track by watching the godmother of electronic music doing some reel-to-reel beatmatching back in the '60s." BR

Breakdance the movie dance off
"Ice-T provides the backdrop for this classic dance off. Who says crop tops don't work on men?" JU

Rolf does Zeppelin
"If you're tired of waiting for Plant to get off tour, then watch Rolf do Stairway. How does it affect you blokes? Ooh it makes us wonder…" JU

John Schooley And His One Man Band - Drive You Faster
"Conclusive proof that not being able to find other like-minded musicians is no excuse for failing to start a band, Schooley lays down one man dirty blues grooves in fine style. Check out his MySpace page for more." CV

David Bowie performs Five Years live on The Old Grey Whistle Test
"Like Later...With Jools Holland only with better bands and without the irritating boogie-woogie piano, The Old Grey Whistle Test was must-see TV for British music fans in the technologically-challenged 1970s. If you don't enjoy this classic Bowie performance, it's quite possible that you are clinically dead." CV

Charlie Hunter plays organ guitar live
"Normally, if you suggested that I check out a YouTube video of an eight-stringed, fanned-fret jazz guitar player, I'd slap you around the face. Unless, of course, you were talking about Charlie Hunter." CW

Soulive's Neal Evans soloing live
"Funk bands don't need a bass player - and Neal Evans from Soulive is proof. He plays the bass on one of his keyboards, and it grooves like a freight train being driven by Maceo Parker. Evans brings the bass funk halfway through so stick it out." CW

We've all heard Joe Cocker's version of The Beatles' With A Little From My Friends, but we didn't realise he changed the words too... In this hilarious video, some clever clogs has subtitled Cocker's performance at Woodstock to Adam Buxton-esque effect.