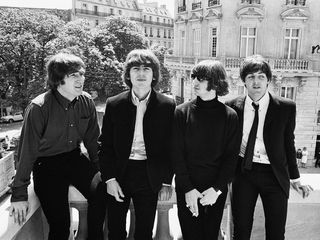 The Beatles: gently weeping into their guitars. (Image credit: Apis/Sygma/Corbis)

The Beatles' media profile over the past couple of weeks has probably been higher than at any time since they split up. However, this hasn't translated into chart-topping sales numbers in either the UK album or video game charts.

First came the news on Sunday that Forces Sweetheart Dame Vera Lynn had topped the album rundown with her Best Of collection (at 92, she's the oldest person ever to achieve the feat).

The Beatles did manage to get four of their remastered albums into the Top 10, but the highest placed of these was Sgt Pepper, which stalled at number five.

The result doesn't seem any more impressive in the all-formats video game chart, where The Beatles: Rock Band could only make number four. To make matters worse, the number one slot was filled by rival title Guitar Hero 5, which might actually annoy Courtney Love more than it will Paul McCartney.

At first glance, this looks like a fairly underwhelming commercial performance by The Fab Four, but there are easily explainable reasons for The Beatles' failure to top the charts in 2009.

In the albums listing, their sales were split across all their releases - a number one here was always going to be difficult. And in the video games chart, the band's older fanbase was never likely to propel them to glory.

Like it or not, to a majority of video gamers, the Guitar Hero brand is stronger than The Beatles', and they'd rather play at being Kurt Cobain than they would John Lennon.

Still, those in The Beatles camp aren't likely to be too concerned: Billboard reports that, although they won't be making number 1 in the 200 chart this week (that honour will go to Jay-Z and his The Blueprint 3), they've still managed to shift 626,000 units since the remasters were released.