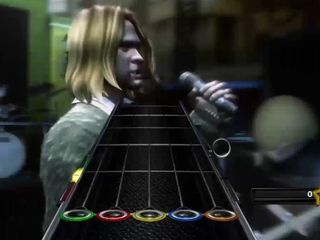 Does Guitar Hero 5 give Cobain a 'Bad Name'?

Dave Grohl and Krist Novoselic are "dismayed and disappointed" in the Kurt Cobain avatar to be featured in the upcoming Guitar Hero 5 game, and today the two former Nirvana members issued a strongly worded statement regarding the situation.

The pair wrote, "We want people to know that we are dismayed and very disappointed in the way a facsimile of Kurt is used in the Guitar Hero game. The name and likeness of Kurt Cobain are the sole property of his estate - we have no control whatsoever in that area.

"While we were aware of Kurt's image being used with two Nirvana songs, we didn't know players have the ability to unlock the character. This feature allows the character to be used with any kind of song the player wants. We urge Activision to do the right thing in re-locking Kurt's character so that this won't continue in the future.

"It's hard to watch an image of Kurt pantomiming other artists' music alongside cartoon characters. Kurt Cobain wrote songs that hold a lot of meaning to people all over the world. We feel he deserves better."

In Guitar Hero 5, the Nirvana songs Smells Like Teen Spirit and In Bloom are among the dozens of titles. What has Grohl and Novoselic beside themselves can be viewed in the video below, in which a pixelated Cobain dances around and performs bits of songs by Public Enemy and Billy Idol and then breaks into versions of numbers by Bon Jovi, Stevie Wonder and Bush.

So what do you think? Is this just a bit of good-natured fun or a rock 'n' roll horror of horrors?

While Activision has stated that it secured "the necessary licensing rights from the Cobain estate in a written agreement signed by Courtney Love to use Kurt Cobain's likeness as a fully playable character in Guitar Hero 5," Love is singing a different tune.

In a series of Twitter blasts, she blamed Dave Grohl for the Cobain avatar. Responding to an angry Tweet, she wrote, "you can assrape dave he was always a bad seed and is still riding the shit while i take bullets if theres a hell hes going. im not."

In another Tweet, Love wrote, "activision know this aos very very bad press indeed wait til you see what MY lovely lawyer has cooked up, i never ever signed off on this."

So much for punctuation and syntax. In any event, this is bound to get pretty interesting. Meanwhile, what do you think of that video?