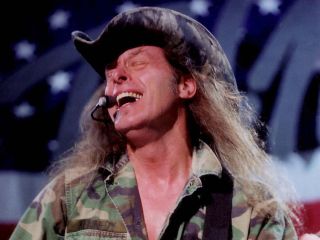 Jack White may call himself a Raconteur, but he's got nothing on fellow Detroit native Ted Nugent.

Ask The Nuge a question and you get a thesis, a dissertation, a stump speech, a stream-of consciousness that will take you on a journey to the center of your mind. "Nobody in rock can out-talk or out-think me," says Nugent.

"People like to assume, wrongly, that because I'm a hunter and a rocker that I'm not well-read or up on the facts. That's okay - I love proving the doubters wrong. And I'll cook 'em a venison dinner and educate them."

Since his debut in 1968 with The Amboy Dukes, Ted Nugent has been proving musical doubters wrong too, and in the process he's sold over 35 million albums. "That's a lot of discerning, thoughtful, well-meaning music-loving folks who respect and revere the intensity that I lay down night after night," says Nugent. "Ask me what I think of critics? Well, hell, there's a few of 'em. But there sure ain't 35 million of them."

In addition to his musical career (in which he's just celebrated his 6000th show), Nugent has expanded his empire. He's on the board of the NRA; hosts radio shows where he espouses his conservative views; writes books, such as his latest, Ted White & Blue: The Nugent Manifesto; holds court with political figures of every stripe and runs camps for children and wounded veterans to teach them safe hunting practices.

But the stage remains Terrible Ted's home. And just shy of 60, he's having more fun than ever. "Wang Dang Sweet Poontang is my favorite 12 minutes every day," he says. "It goes places where no other song can go." Nugent is especially effusive concerning the efforts of his current bandmates, bassist Greg Smith and drummer "Wild" Mick Brown. "These guys give me the freedom to explore every nuance of my creativity every time we plug in," he says. "They're Olympian musicians. They play harder and with more love than anybody I've ever seen - and I've seen plenty."

Ted Nugent recently sat down for an extensive, boisterous podcast interview with MusicRadar, during which the guitarist held forth on topics both musical, social and political - and in Nugent's view, all are intertwined. So sit back, kick up your feet, and revel in the wit and wisdom of The Tedster. You won't agree with everything he says, but you will be entertained.

"I entertain everybody," says Ted. "Black, white, whoever you are, whatever your religion or political agenda - Ted Nugent is here to rock your world."

Part one - Ted talks about the Gibson Byrdland, African-American musicians and conservative politics
Download (right click and Save As...)

Part two - On singing Wang Dang Sweet Poontang at 60, '70s stardom, and how hunting and music mix
Download (right click and Save As...)