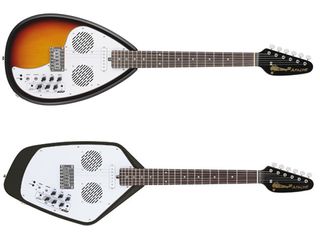 The Vox Apache Series has been floating around for the last six months or so at trade shows, but now it looks like the new range of travel-friendly electric guitars is finally due to make its way into the shops.

Featuring revived classic Vox Phantom and tear-drop shape bodies, the new guitars contain an in-built two channel amp, speakers and a drum machine with over 60 patterns to choose from - all powered by six AA batteries.

Vox has taken a bit of a gamble with these quirky designs, but with the recent (and highly popular) trend for retro-style guitars and amps, and a reasonable price (MSRP $299.99 - roughly £194), we suspect they might find a home both within the hotel rooms and outside of the travel guitar market.

For more information, check out the full press release below.

The new Series brings back two unique body styles from the classic Vox back catalog: the Teardrop-shape Apache I, and the Phantom-style Apache II. Both have been fitted with onboard amplification and practice features.

Suited for on-the-go practice, each Apache Series instrument is equipped with a built-in, 2-channel amplifier (clean/overdrive) and a pair of three-inch speakers. Volume, Gain, and Tone controls provide a wide range of sounds. Power comes from six AA Batteries, yielding roughly 26 hours of playing time, according to Vox.

Specific to the Apache Series are 66 onboard rhythm patterns, divided into musical genres. Tempo and Level knobs are provided, as well as a Start/Stop button. Of the 66 Patterns, six are extended length "Song" patterns. In addition to providing accompaniment, these patterns are ideal for rhythm training or for backstage warm-ups.

A headphone jack can mute the internal speakers, and an Aux input allows jamming along to an MP3 player, computer tracks, etc. An E-String tuner is also built in to each instrument. All models include a strap and a carry bag.

The Vox Apache I Teardrop Travel Guitar and Apache II Phantom Travel Guitar have a US street price of $299.99 with availability to be announced shortly.