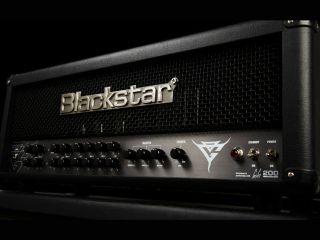 Launched from a garden shed in 2004, Blackstar has since seen some of the most rapid growth of any guitar brand. Now it's announced its first ever signature amp head: the Gus G Blackfire 200.

Built around the firm's KT88-equipped Series One S1-200 model, the most interesting feature of the new amp is the addition of integrated custom-voiced 'Fire' and 'Fury' overdrive channels, as featured on Gus G's signature HT Blackfire pedal.

That means a total of four amp channels, including Clean and Crunch options (each of which have two modes), so although it's aimed very squarely at the metal market, the Blackfire 200 should still be a flexible head.

In addition, there are the usual custom graphics. These can often make or break a potential purchase and while Gus has put his own stamp on the amp, the first images show he's kept things tasteful - opting for a couple of his 'Evil G' logos on the control panel, a brushed aluminium front and a cast metal Blackstar logo.

How much the new Blackfire channels will have to offer remains to be seen, but both the HT Blackfire pedal and and the S1-200 head have scored highly in our past reviews and there's almost certainly more on offer here than the customary flash paintjob.

For more information on the Blackstar Gus G Blackfire 200, check out the full press release below.

Four switchable channels are offered: a Clean channel with Warm and Bright modes,
a Crunch channel with Crunch and Super Crunch modes, plus Fire and Fury overdrive channels specially voiced in partnership with Gus G. for a devastating full metal assault.

The Blackfire 200 features a custom cosmetic, including a brushed aluminium front panel complete with an 'Evil G' logo and a cast metal Blackstar logo.
Each model comes with exclusive Gus G. accessories including a signed certificate, an 'Evil G' key ring, trading card, pick, dust cover and a Firewind CD Few Against Many.