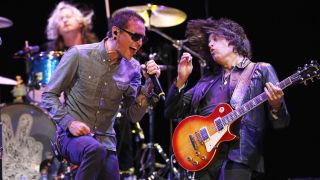 Following Stone Temple Pilots' split earlier this year with singer Scott Weiland, it seemed as though it might be some time before the dust settled and we had any new music from the classic rock-leaning band. So it comes as a surprise indeed that their new EP, High Rise, comes just eight months after their much-publicized break from the trouble-plagued frontman, and even more astonishing is the fact that the five tracks are the freshest they've offered in more than a decade.

And if that weren't enough, the three original STPers (guitarist Dean DeLeo, bassist Robert DeLeo and drummer Eric Kretz) are now joined by Linkin Park's Chester Bennington, whose impassioned, muscular and versatile vocals fit the band's hard-crunching rock-pop sound like a velvet glove. Musically, the group seems to punch with renewed vitality and force, and with Bennington displaying a greater melodic range than his predecessor, the five tracks on High Rise feel as though a true breakthrough and positive signs for the future could finally be at hand for a band that has waited patiently for its second act.

Dean DeLeo sat down with MusicRadar to talk about how STP got Bennington in the fold, how things are working out and whether Linkin Park minded sharing their vocalist.

Apparently, Chester has been a longtime Stone Temple Pilots fan. Did you just call him up and ask him if he was interested?

"Yeah, it started with a phone call. I called Chester. It was pretty much based on a grander scheme. We had a pretty big catalogue that we knew he would do justice to, and we had a future to forge. We knew there would be amazing chemistry between us all.

Were there any other names you considered for the band, known or unknown singers?

"No. There was only one name that was brought to that table, and that was Chester."

Not that there was an audition per se, but what kind of getting-to-know-you meeting took place to see if this would be a good fit?

"We kind of did it a little backwards, actually [laughs]. We spoke with him on the phone, and we all agreed that we wanted to do this. The second thing we did is what we should have done first - we probably should have gotten in a room. But it's something I felt in my bones. I felt that it was going to be productive and creative."

How soon from that phone call was it till you were all in a room together?

"Oh, goodness… My timeline isn't so great. I'd say it was a few weeks or maybe a month later, if that. The songwriting process started a little bit before that with the use of technology and kind of MP3ing each other ideas. When we got in a room together, Robert had already fooled around with a rough idea of Out Of Time. We came into the session and dove right into that."

I have to imagine that you've stockpiled a lot of riffs and song ideas over the years.

"Yeah, there was a lot of material, man. I'm just speaking on behalf of myself, but you know, if I bring in eight or 10 songs, they're all my babies - I'm gonna like all of them. But the decisions aren't really mine and mine only. Between the four of us, these are the five songs that came to be on our first outing."

Not to belabor the issue of Scott, but what was the final straw that led to you guys going your own way?

"You know, it wasn't the… I don't know how I can put it… You know, if I really went into it, it would make him look far too bad, and I'm just not willing to do it. There was a lot. Maybe even Scott knew as well - I don't know, I can't speak on behalf of him - but the three of us knew it just couldn't go on with him. He became incapable of doing so on a lot of different levels - mentally, socially, philosophically, physically. I don't know if he was happy being around us, you know?

"And it's a shame because it was something that was really, really beautiful to a lot of people. It's a shame that it had to go down that way, but it was one man's actions that led to another man's decision, so he sealed his own fate on that one. Like I said, if I really went into it, it wouldn't be very nice."

Chester is still very much a member of Linkin Park. Did the fact that he can't devote himself 100 percent and 24/7 to STP concern you at all?

"You have to keep in mind how Eric and Robert and I have been working for he past 15 years or so. We've been driving a car with three wheels. And now, I don't even need to say it - look what we've accomplished in the last eight months. [Laughs] I haven't been able to accomplish that much in years!"

Chester's vocals are sweeter and more delicate than Scott's. I think he has more range for your material. What's your assessment?

"Well, you're comparing two different vocalists; you're comparing a baritone to a tenor. But yeah, you're right. You're absolutely right, man. There is a huge range that Chester has that we can tap into. It's nice. There's a lot of songs, especially early on in the catalogue…You know, our catalogue became very limited because of where Scott's range went. It's no fault of Scott's, by any means, but a singer really has the hardest job. They're exerting the most physical force out of anyone on that stage; they're using every bit of their bodies to project vocally, melodically, harmonically - it's a workout, man.

"I don't know many singers who can sing without changing the key to something they wrote 20, 25, 30 years earlier. There comes a point where you start detuning the songs, and you can't go down any further. Being a guitar player, you'd be playing rubber bands. Chester's voice lends itself really nicely for the earlier stuff that we were unable to play for a long time."

What kinds of guitars are you using on the new songs?

"Being that we recorded this at Robert's house - he built a really beautiful studio in his basement - we kind of latched onto a lot of his guitars. We used some Gretsch Country Gentlemens, which we've never used before. He's got a really interesting semi-hollow Kent guitar, kind of a '60s Sears catalogue thing. [Laughs] We used those, but of course, I usually go to a session with a hollowbody, whether it's a 335 or a 330 or a 175, and then there's a Les Paul and, of course, a Tele or a Strat. We utilized every guitar."

Moving forward, do you eye making a full album with Chester? Some artists don't see the point in making LPs these days.

"I'll be very honest with you: I love the digital world. I love having my entire record collection on my iPhone; I can go in my car and listen to everything and anything. And it's funny, because my CDs and albums are packed away in boxes - they just take up space. I love the convenience of the digital world, but I'm not fond of what the compression does to the music. I think we'll do an album next. We definitely have the material. It just comes down to time."

What was the reaction in the Linkin Park camp to Chester joining STP? Were they cool with it?

"I'll tell you, man, it's a testament to what kind of people are in that band and what human beings they are, because when Chester and I spoke, one of the first things we talked about was that in no way could this inhibit our families or Linkin Park. Those guys were very, very supportive, to the extent where they were offered to utilize Linkin Park's website - not like some people would do, where you use somebody like a stepping stone. They offered their good fortune and goodwill, their sweetness and kindness. It's amazing. As I said, it's a testament to who they are as people."