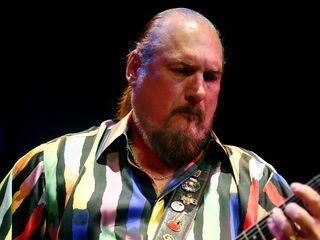 Over the years, guitar legend Steve Cropper has played on more than 3,000 recordings, many of them flat-out classics such as Wilson Pickett's In The Midnight Hour, Otis Redding's (Sittin' On) The Dock Of The Bay, Eddie Floyd's Knock On Wood and Sam And Dave's Soul Man (on which Sam Moore famously cried out, "Play it, Steve!").

However, there's one thing Cropper hasn't gotten around to in a while: putting out a solo record. In fact, it's been 42 years since his last such effort, 1969's With A Little Help From My Friends. But all of that has changed with the release of Dedicated, a tribute to the 5 Royales, an underappreciated '50s and '60s R&B group whose hits included Think (which James Brown later covered, twice) and Dedicated To The One I Love, a song that would become a smash for The Mamas & The Papas.

"They were one of the first out-of-town bands who really caught my ear," Cropper told Gibson.com recently. "In Memphis you could see a lot of great bands. But I was too young to go to places like Club Handy, and I didn't have the money to go to the Auditorium to see Chuck Berry and Little Richard.

"Later I saw Bo Diddley and a few people like that there. But the 5 Royales were one of the first bands that I really loved and I got to see them live at the Beverly Ballroom, so they left a strong impression on me. Especially Lowman Pauling, the guitar player."

Pauling died in 1973 at the age of 47. Reportedly, he was working as a custodian in a Brooklyn synagogue when he collapsed of an epileptic seizure. "I'm deeply saddened I didn't get the chance to meet him," Cropper told Spinner.com. "I've talked about him my whole life."

On Dedicated, Cropper is joined by music greats BB King, Bettye LaVette, Buddy Miller, Steve Winwood, Sharon Jones, Lucinda Williams, Dylan LeBlanc and John Pepper, all of whom have their roots planted firmly in R&B. But what about Queen guitarist Brian May, who turns up on the track I Do?

"I have a lot of respect for him, but wasn't sure how you put Queen and Stax together," Cropper said. "But Brian loves American music and R&B. He is a friend of [producer] Jon Tiven, and when Jon called him, he was in. And his tracks sound great."

On the prospect of getting together again with Booker T Jones and bassist Donald 'Duck' Dunn, Cropper said that it's "just a matter of timing and the right bookings. There's some talk of a New Year's Eve gig that I can't disclose. Duck and I are up for it and we think Booker is, too. Me and Duck will do some work this summer with Eddie Floyd. And all three of us did an album together with an artist out of Australia named Guy Sebastian. Booker couldn't do that tour, but me and Duck and Lester Snell, our other keyboard player, did it."