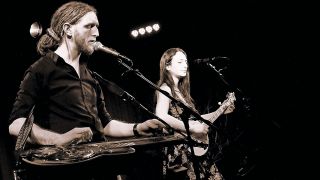 Phillip Henry is a lap-slide Dobro and acoustic guitar player in an award-winning folk duo with Hannah Martin. Phillip started playing around the age of 15 when he was attracted to the playing of Hendrix, Clapton and Jimmy Page at a time when Britpop ruled the airwaves.

Initially, he began playing an S-type guitar and soon formed a band with some schoolmates covering Zeppelin and Hendrix, plus some originals.

"I learnt a lot of it out of guitar mags, actually! So it was blues/rock influences early on - lots of improvising, making up my own solos and that kind of thing."

Who has he listened to?

After a while, Phillip found his way into acoustic blues playing and, after watching Eric Clapton's Unplugged video, picked up on slide playing, too.

"From the acoustic blues, I got into players like Davey Graham and Bert Jansch. I was particularly taken with Davey Graham's 'world music' outlook on the acoustic guitar, with the influences of Indian and Arabic music in there as well as the traditional folk music of the British Isles. So I went a little in that direction at that point."

What's so great about his playing?

Despite being set in a folk environment, Phillip's slide playing extends far beyond the bounds of pure folk or Americana.

After becoming fascinated by the UK's top fingerstylists, his attention was drawn to the playing of Ry Cooder and Jerry Douglas. But it was an accident in which he damaged his wrist that was the reason for him beginning to play lap slide.

"I moved to Devon and it happened mid-point while I was doing a music degree here. I had to take a few months off from playing guitar because I'd injured myself a bit, so I took about six months off and when I came back to playing, I started on the lap slide for the first time…"

Why do you need to hear him?

If you enjoy the skilful intermingling of various influences all wrapped up in some devilishly well-crafted slide playing, then look no further than the Phillip Henry & Hannah Martin duo.

On taking up the lap slide, Phillip was alerted to an album called Calcutta Slide by the Indian master Debashish Bhattacharya.

"Obviously, Jerry Douglas has been an influence and I was quite heavily influenced by an Indian player called Debashish Bhattacharya, with whom I studied for three months in 2008."

What gear does he use?

Gear-wise, Phillip's first instrument of choice these days is a Dobro made by a little-known Cincinnati-based maker called McHenna, having bought the instrument in Nashville at the world-renowned Gruhn Guitars.

He also uses Gold Tone Dobros, in particular the Paul Beard model. For slide duties, Phillip chooses a Dunlop 925 Ergo Tonebar. The Dobros have a Fishman Nashville Series pickup in them - which is the Jerry Douglas signature pickup - and from there…

"I go into the Fishman Aura pedal that's specifically for resophonic guitars. I also use a Boss OC-3 octave pedal and an Electro-Harmonix Freeze pedal, plus the Electro-Harmonix Cathedral Stereo Reverb. I occasionally use a Boss TR-2 tremolo pedal. That's for the Dobro. When I switch to acoustic, I bypass the Aura pedal."

The duo with Hannah Martin is now on its third album, which is entitled Watershed. Check out the website at the bottom of the page for selected tracks and some video.

"I met Hannah about six or seven years ago. We were playing in a band together called the Roots Union and when they split up, we carried on playing as a duo and we've been touring predominantly on the folk circuit for the last five years."