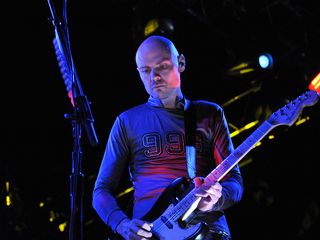 Billy Corgan played a tribute show to Sky Saxon on 24 July. The one-off band played under the name Spirit In The Sky for the evening and included Mark Weitz of Strawberry Alarm Clock and Mark Tulin of Electric Prunes.

And on drums was 19-year-old Mike Byrne, who joined the Smashing Pumpkins following an open call for auditions after original drummer Jimmy Chamberlin left the band in March. Byrne is a freshman from the Berklee School of Music and 23 years younger than Corgan.

The LA show was in memory of the Seeds' Sky Saxon, who died on 25 June.

The group played Norman Greenbaum's Spirit In The Sky, the Seeds' 900 Million People Daily (All Makin' Love), and a new Corgan-penned tune, possibly called Freak. Watch it below.