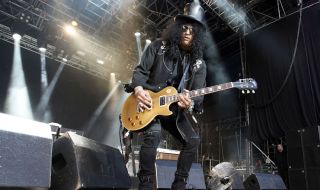 GUITARS AND AMPS EXPO 2014: Slash has never kept it a secret how much he loves Queen, especially the timeless playing of one of his guitar idols, Brian May. But what exactly are Slash's favourite Queen guitar riffs? As you're about to discover, they're a mixed bag. Surprisingly, there's not a Bohemian Rhapsody in sight...

"I loved this riff before I even started to play guitar, that's how cool it is."

More Of That Jazz

"It's actually one of the first songs I learned on my first ever one-string electric guitar."

Tie Your Mother Down

"I actually performed this with Queen at the Freddie Mercury Tribute Concert. It's just one of the most instantly recognisable riffs ever."

Let Me Entertain You

"It's a very cool riff. I think it's in parallel sixths. Brian May used the same idea later on The Hitman from the Innuendo album."

Taking your lead from Slash, now you can learn how to play the intro, verse and chorus of Fat Bottomed Girls for yourself with help from our sister publication Total Guitar:

Want to learn the rest of this song? Head to Total Guitar's YouTube channel where you will find video lessons on how to play the lead breaks, verse bends, and more from Fat Bottomed Girls.