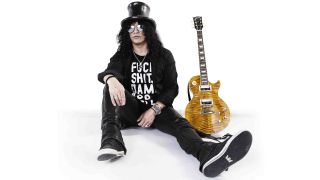 In one of the stranger supergroup stories to land in recent months, it's emerged that after leaving Guns N' Roses in 1996, Slash almost joined The Stone Roses, who had just lost founding member John Squire.

Former Stone Roses guitarist Aziz Ibrahim made the revelation in a Stagelift Podcast interview, before revealing that the top-hatted one's leather trousers prevented him joining the UK alt-rock heroes.

"I know there had been auditions - Slash had offered to play," Ibrahim recalled. "There was a lot of bitterness and anger and so forth; maybe they wanted to piss him off, so they thought, 'Let's get the greatest rock icon of all time.' Slash was in England, he was in Snakepit, the management knew the Roses and wanted to manage the Roses.

"Goldstein wanted to manage the Roses, so Slash had offered Manny or Ian - 'I'm not sure,' one of them said. Afterwards, they thought, 'Yeah, yeah, we'll get this big rock icon - that would really annoy John.' Then [they] said something to the effect of, 'We're not going to work with a guy with leather pants, are we?'"

My oh my. That third album would have been very different indeed…