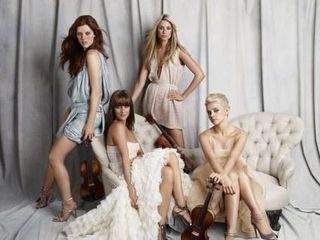 Escala: about to get aquainted with a man in a top hat.

What happens when heavy rock meets 'contemporary classical' by way of pop's most successful impresario? We're not sure, but it seems that we're about to find out.

It's being reported that Slash is set to duet with Escala, the 'electric string quartet' who made a name for themselves on Simon Cowell's Britain's Got Talent TV show last year.

The Sun reports that the unlikely match-up will see Escala and Slash heading into an LA studio to record a cover of Led Zeppelin's Kashmir for the pop/classical group's debut album.

This is being reported as news on Escala's official website, so we can only assume that it's true.

Almost inevitably, it was Cowell who set up this up - at Elton John's Oscar party. The Sun quotes an 'insider' as saying: "Simon thinks Slash is incredible and they got on like a house on fire at Elt's party.

"He was looking for someone unexpected to work with the girls and asked if he'd be interested. [Slash] really liked the idea and jumped at the chance."

Other songs on the Escala album will include covers of Snow Patrol's Run (a perennial Cowell favourite), Robert Miles' Children and Wings' Live And Let Die. It'll be available on 25 May.