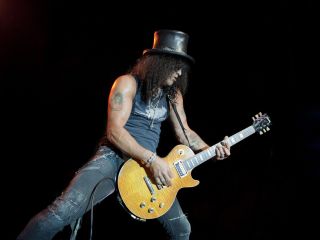 Rock guitar legend Slash is due to receive his own star on the Hollywood Walk Of Fame according to the BBC.

The UK news organisation reports that the former Guns N' Roses guitarist and solo artist will be presented with the plaque on 10 July at the Hard Rock Cafe on Hollywood Boulevard.

The ceremony will be attended by legendary Hollywood producer Robert Evans and legendary Hollywood winner Charlie Sheen. It will then be followed by an acoustic set and discussion with Slash and his solo project vocalist, Myles Kennedy of Alter Bridge.

No doubt Slash will appreciate the timing of the event, coming shortly after the release of his second solo album, Apocalyptic Love, and in the middle of a summer of shows set to take place around the globe.