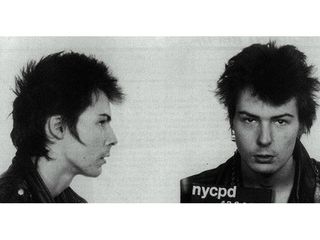 Sid Vicious was ready for his close-up

Being dead for 30 years has done little to keep Sid Vicious out of the hearts and minds of music fans. The notorious Sex Pistols bassist was just named the Most Controversial Rock Star Of All Time in a new poll.

Vicious, who died of a heroin overdose in 1979, after being accused of stabbing to death his girlfriend Nancy Spungen, scored a whopping 25 percent of the 2,000 music fans who were polled by Orange.uk.co.

The highest placing contemporary artist was the hard-living Amy Winehouse, who came in fourth. Meanwhile, Michael Jackson, on the verge of a highly publicized 'comeback' residency in London, rounded out the top five.

"There are some colourful characters in rock 'n' roll," said Richard Wheeler, head of Music at Orange.co.uk. "It's clear contemporary artists still have some way to go before they knock these legends off their perch. Old reputations die hard - especially when you're known for biting off a bat's head live on stage."

So what do you think? Should ex-Libertines and current Babyshambles singer Pete Doherty be above Jacko? Should Madonna be ranked higher than Britney Spears? And does Sid Vicious deserve top 'honors' on the list?