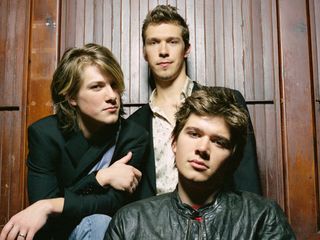 You remember Hanson, right? That teen trio of brothers who made a big, multi-platinum splash in the '90s with their oh-so-poppy song MMMBop? Sure you do. Turns out the Hanson boys, uh, men are huge metalheads, and they're proving it in a most unexpected way - by covering Slipknot!

Several days ago, a video surfaced on YouTube showing Isaac, Taylor and Zac Hanson working on a version of Wait And Bleed, which was the first single from Slipknot's 1999 debut album. At first, the brothers stayed MMMum on what was supposedly a leaked clip. But in an interview with ShockHound, they finally admitted that they were indeed recording an album of Skipknot covers.

"We have always cited classic soul and rock and roll as an inspiration, but we have had long-time respect for heavy metal and bands like Slipknot who capture true angst," drummer Zac Hanson said. Of the album itself, which has no title or release date as of yet, guitarist Isaac Hanson said that it's "been in the works for some time."

And yes... this was an April Fool's joke! Don't feel bad - we totally fell for it ourselves. Thanks, ShockHound, for a good laugh.