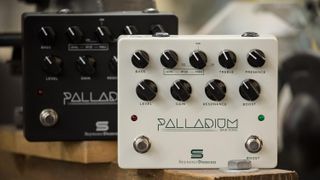 We saw it in the flesh at NAMM, and now Seymour Duncan has announced the Palladium Gain Stage will be hitting stores very soon.

The pickup mogul reckons it's "the first stompbox that actually captures the feel and responsiveness of a high-gain tube amp", with three gain stages and a fully featured EQ with sweepable mid frequency.

This triple gain threat means the Palladium can cover tones from light overdrive through to classic-rock grit and full-on metal distortion.

Elsewhere, resonance and presence controls shape the extreme low- and high-end, while a boost knob adds overdrive to the beginning of the signal path.

In fact, the whole package is so versatile, SD claims you can use it with a power amp, clean guitar amp or already distorted amp.

The Seymour Duncan Palladium is available from April for £349 street.