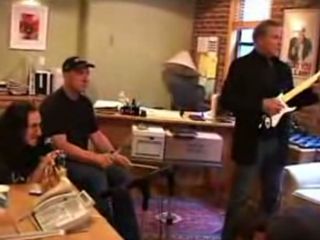 Even Rush can't be Rush all the time

It's nice to know that even Rush can't play their own songs - on Rock Band, at least.

Last week, before appearing on The Colbert Report, the band entertained themselves backstage by attempting to play Tom Sawyer on the popular video game. "Start it at Expert and we can scale it back if we have to," a show assistant advises.

Things start out promisingly, but the overly serious musicians (they are Rush, after all), quickly become undone by the moving pixels of their own composition. And when the 'Failed' sign finally appears, the band seem truly dispirited.

"I can't play to that," Neil Peart says, clearly annoyed at his lack of gaming prowess.