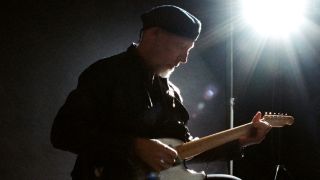 There's no place like home, even if it's someone else's. Just ask guitar virtuoso and Brit folk figurehead Richard Thompson, who decamped to Nashville to make his new album Electric in the laid-back environs of producer Buddy Miller's house.

Fronting the core trio with whom he's played for the best part of a decade, Thompson rolled back the years and returned to more intimate and spontaneous working methods, resulting in arguably his most satisfying album since Mock Tudor in 1999.

Folk-tinged ballads like Another Small Thing In Her Favour and Saving The Good Stuff For You nestle snugly next to more venomous, amped-up offerings like Stuck On A Treadmill and Good Things Happen To Bad People, Thompson's lyrical eloquence matching the dexterity of his guitar playing note for note.

Miller adds occasional rhythm guitar, while Thompson's vocals are supported by bluegrass heroine Alison Krauss (who covered Thompson's Dimming Of The Day on her own last album) and Nashville-based, Liverpool-born Siobhan Mayer Kennedy, the wife of Miller's engineer Ray Kennedy.

The album was recorded quickly, with most tracks done and dusted in a couple of takes with a minimum of overdubs, and here Thompson tells MusicRadar how it all came together...

What made you decide on Buddy Miller as producer?

"I had a few names on lists I'd drawn up since the last record, and Buddy's name was always near the top, because just about everything he's done in the last few years has really impressed me. I think he recorded at least part of Robert Plant's Band Of Joy album [on which Thompson's own House Of Cards was covered] at his home studio, I loved the Majestic Silver Strings project he did with Bill Frisell and Marc Ribot. He also produced a Solomon Burke record that I thought was tremendous.

"He's the kind of producer who brings to the project whatever is required, he doesn't bring any ego. He'll sit in and play a bit of guitar if it's needed, but he's just as happy not to, he doesn't feel compelled to put too many of his own fingerprints on the record, but he's always ready with good suggestions."

Working at his home studio in Nashville sounds like the polar opposite to your last album Dream Attic, which was recorded on stage while touring.

"Recording at Buddy's house was very relaxed. It seemed for most of the time that we were just sitting around jamming, and then suddenly we'd made a record.

"Dream Attic was all done live on the road, which I thought was going to be really easy, but turned out not to be. We cut out the expense of a studio, got a mobile unit and did some gigs but it turned out to be very difficult, in terms of being rehearsed enough and being familiar enough with 50 minutes of new material. Everyone has to be up to speed at the same level, and it doesn't always work out that way. We weren't overdubbing, we had to nail fairly flawless performances every time, and that puts added pressure on you.

"So, I didn't want to do that again for the next project, and I thought recording in someone's house, as opposed going back to a regular studio, was appealing because there'd be a whole different vibe again. There wouldn't be a red light looming over us, and we might be able to get a bit of a garage vibe to what we were doing."

What's the layout of Buddy's studio?

"We did the whole thing in two or three rooms, basically. The drums and the mixing console were in the living room, I was doing the vocals in the kitchen. We rehearsed for a few days to get used to the material, but when he pressed the record button it all got done extremely quickly, without really trying to. We were getting through about four tracks a day."

What kind of desk does he use?

"He uses a 16-track analogue machine, an MCI. It's probably unusual for a home studio to use analogue machines, mainly because they're harder to keep serviced. I've got a little digital desk at home, for tinkering about on, which is a lot easier to maintain. Analogue machines need constant attention; the heads need cleaning, and you really need an engineer on stand-by, someone who can get there within 20 minutes to give it any tweaking it might require. But there's a different attitude when you're recording on analogue, the sound is a lot warmer and I think it gives the music a more interesting texture."

Was it a return to the recording methods you've used in the past?

"I was using 24-track analogue machines up until Mock Tudor, but since then I've mostly recorded straight to digital because the technology has improved so much - and it's much cheaper to record that way. You might master to quarter- or half-inch tape at the end of the digital process, filter it through old tube microphones to warm up the signal. There are various things you can do within the digital domain to get the recording sounding more human."

With the album being recorded so quickly, it doesn't sound like you encountered any hiccups with the temperamental analogue machine.

"Not really, no. We did use this thing called Clasp, which basically takes the analogue recording and dumps it into Pro-Tools so that you can manipulate it later. There were a couple of issues with that software, but even that didn't cost us much in the way of time, the whole thing was remarkably reliable. I have to give full credit to Michael Jerome and Taras Prodaniuk, our drummer and bass player, for being such great musicians and nailing their parts so quickly. We spent about another week justifying our existence by doing a few overdubs, but relatively few, it has to be said."

What guitars do you play on the album? Are their trusty models you return to time and again?

"I have a slowly evolving small array of guitars that I use. I have a Fender Strat that's made up of bits, in that it's got the usual neck and body but the pick-ups are non-Fender and I think they sound a little hotter. So, it's a kind of mongrel Strat, the pale blue one I've been using for the last few years, it's a great sounding guitar. I also use a contour-bodied Telecaster with three pick-ups which, again, are non-standard."

Richard Thompson with his Telecaster, 2013

Is there any guitar on Electric that was new to you?

"I picked one off the wall at Buddy's house, an old Guild Excelsior, a small hollow-bodied guitar that I used to pick out the melody on the track Salford Sunday. I think it has a delicate sound that perfectly suited the delicacy of the song. I'd never played one before, I just looked at it there on the wall and got a sense that it would be a good fit."

Do you have an acoustic of choice that you've stuck with?

"For recording I use a Lowden signature model, which has a beautiful ringing sound to it. It's too good to take on the road, and it would mean filling it with electronics that might alter the tone too much, so when I'm touring a use a more standard Lowden. I think they're the best small production line acoustics out there, really consistent in quality and sound."

Do you have an expansive collection of guitars at home?

"It's constrictive rather than expansive. I actually try not to collect guitars, which is hard when people keep wanting to give you them. It's very nice of them, but I've only got so much storage space, so I've probably only got about 15 guitars in total. I like guitars to be played, so if I'm given something I know I'm not likely to play much I tend to pass it on to someone else. Guitars need to be loved and cherished, and if you've got too many you can't give them all the attention they deserve."

Have there been instances when a manufacturer has given you a guitar to endorse and, once you've tried it out, you've not been keen on it?

"Yes, and that can be a bit uncomfortable. But you have to tell them the truth, you have to be honest and say what you really think of it, otherwise you're doing them a disservice. There's been a few times when I've tried out a model and it's not done what it's supposed to do, or at least not what I want it to do."

Electric is released via Proper Records on 11 February, and Richard Thompson tours the UK from 20 February. For more information and pre-order details, visit the official Richard Thompson website.