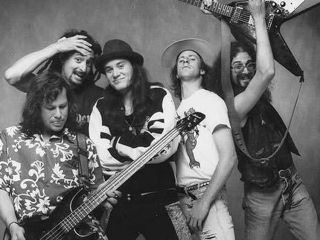 Not exactly the band you'll see this year

The other day we reported on the slim-at-best details surrounding the Faith No More reunion tour. Now the band, or at least bassist Billy Gould, has expanded on the situation, most notaby who is in the band - and who isn't.

"What's changed is that this year, for the first time, we've all decided to sit down together and talk about it," Gould said in a statement.

He continued: "What we've discovered is that time has afforded us enough distance to look back on our years together through a clearer lens and made us realize that through all the hard work, the music still sounds good, and we are beginning to appreciate the fact that we might have actually done something right."

The reformed Faith No More may not be the band everybody knows and loves, but it'll be most ot it: founding members Gould, drummer Mike Bordin and keyboardist Roddy Bottum are all back, as is singer Mike Patton, who took over vocal duties after Chuck Mosely departed in 1988.

Of course, the huge absence is the freaky-haired, sunglass-sporting guitarist Jim Martin, who was a member of their band during from 1984 to 1993, an era that encompassed their platinum album The Real Thing and their gold follow-up Angel Dust. It's a huge loss to fans who reveleved in the band's glory days.

Guitarist Jon Hudson, who joined the band in 1997, will be Martin's replacement on this tour.

"Faith No More has always stood out as some sort of unique beast; part dog, part cat - its music almost as schizophrenic as the personalities of its members," said Gould. "When it all worked, it worked really well, even if the chemistry was always volatile.

"Throughout our 17 years of existence, the mental and physical energy required to sustain this creature was considerable and relentless. Though amicable enough, when we finally split, we all followed paths seemingly destined to opposite ends of the universe.

"Yet during the entire 10 years that have passed since our decision to break up we've experienced constant rumors and requests from fans and promoters alike. Nevertheless, for whatever reason, none of us kept in regular touch, much less to discuss any possibilities of getting together."

No tour dates have been revealed yet, but it's been reiterated that the reunion will only cover Europe. Still, Mike Patton has a solo slot at Coachella, a festival the band was rumored to play even before the reunion was announced - perhaps a US audience will catch FNM after all?

The band isn't saying, sticking instead to their script. "We can only hope that the experience of playing together again will yield results erratic and unpredictable enough to live up to the legacy of FNM," said Gould.

"Who knows where this will end or what it will bring up...only the future knows. But we are about to find out!"

Well, OK then. Let us know how it works out.