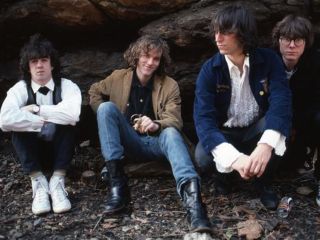 For REM fans, it was three-fourths of the reunion they'd been hoping for: Peter Buck, Mike Mills and one-time band drummer Bill Berry jammed together Monday night in Athens, Georgia.

Berry played drums on a pair of covers: The Beatles' The Ballad Of John And Yoko and The McCoys' Hang On Sloopy. (Nothing too tricky, but hey, it's the spirit that counts.)

The almost-REM reunion took place at an appropriate location, the 40 Watt Club - the venue where the band got their start almost 30 years ago.

Bill Berry quit REM in 1997 after suffering a brain aneurism while performing with the band in Switzerland in 1995. Since then, he's maintained a low profle, farming and playing occasionally on other artists' records.

Berry last performed with REM in 2007 during their Rock And Roll Hall Of Fame induction. (Message to band: keep that man behind the kit and let's have a real reunion!)