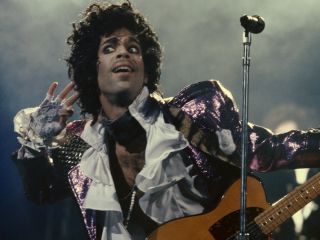 How do you get to play the arenas of the world? Practice! (Image credit: Michael Ochs Archives/Corbis)

Prince likes to keep a tight lid on all things Prince, but a treasure trove of rehearsal footage from 1984 has recently been located, providing an intimate look at the preparations for the hugely successful Purple Rain tour.

Although the video, shot with one static camera, is as low-budget as it gets - it basically resembles surveillance tape - it does give music fans an idea of the paces His Royal Badness put his band, The Revolution, through.

Indeed, the band jams on When Doves Cry for almost 10 minutes. Check out Wendy Melvoin's fine soloing on her Rickenbacker. An underrated player? You know it.

After launching into a little fancy footwork, Prince, seemingly satisfied, signals the band to stop. After the shortest of breaks, they begin the next song in the set, Possessed.

In you want to view the rest of the rehearsal videos - and you'd better hurry as Prince is known to strike content such as this from YouTube - head over to The Daily Swarm.