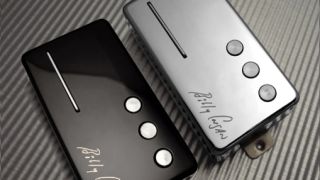 One of NAMM's big talking points this year was Billy Corgan's new Reverend Signature model, and now Railhammer has announced that The Smashing Pumpkins mastermind's pickups will be available independently to fit in other guitars.

Designed in collaboration with Billy, the pickup is part of the Humcutter series, which promises "the clarity and articulation of a P-90, with the thick tone and low noise of a humbucker" - it also adds a mild midrange bump, to achieve what Billy calls "the Sabbath note", akin to a slight cocked wah sound, which helps to cut through heavy distortion and fuzz.

The pickups themselves offer a clever design, where thin rails under the wound strings produce a tight tone, and large poles under plain strings produce a fatter tone, resulting in better tonal balance across all the strings.

Railhammer's Billy Corgan Signature pickups are available in silver or black finishes for $109 per pickup.