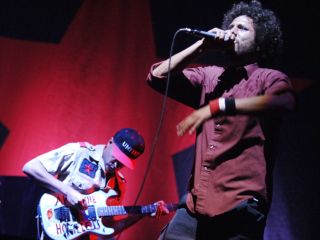 When Rage Against The Machine performed Killing In The Name on BBC Radio 5 Live Thursday morning (17 Demember), censors got more than they bargained for and were forced to cut the song during the expletive-laden crescendo.

Courtesy of the DC3 Music Group, however, which was filming the live feed, you can watch the entire performance here (see below).

Thanks to a Facebook campaign, Rage Against The Machine is locked in a tight battle against X Factor winner Joe McElderry's version of Miley Cyrus's The Climb for Britain's No. 1 Christmas single.

X Factor producer Simon Cowell (who claims to have never heard Killing In The Name prior to the campaign) has protested the movement, calling it 'Scrooge-like.' But the members of Rage Against The Machine have been more than happy to go up against the media mogul.

"I think it's kind a wonderful statement," said Rage singer Zach de la Rocha in a pre-performance interview. "The kids all over the UK have responded to this incredible Internet campaign. I think it says something about the real tensions that people are experiencing in the UK and the United States as well. We're very excited about it."

Added guitarist Tom Morello, "This has been a real, completely grassroots campaign started by real fans of music. I think it's tapped into the silent majority of people of the UK who are tired of being spoon-fed one schmaltzy ballad after another, and they want to take back their own charts. And we are honored that they have chosen own song to be the rebel anthem to try to topple the X Factor monopoly."

Asked what he thought of Cowell, de la Rocha said, "Simon is an interesting character who seems to have profited greatly off humiliating people on live television. We see this as a necessary break in that control."

Despite assurances from the band not to drop the F-bomb during the song's climax, in true (and c'mon, expected) Rage fashion, the group put out in grand style, with de a Rocha singing "Fuck you, I won't do what you tell me!" in a way that would Jim Morrison proud.

Enjoy the video, but remember...NSFW!