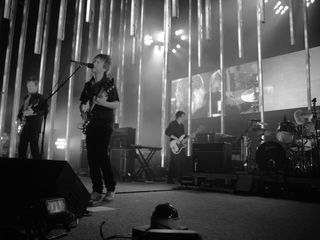 Yesterday Radiohead posted the above video to their YouTube channel, featuring the band performing a new song, entitled Staircase. The recording is taken from an upcoming episode of the From The Basement live session series.

From The Basement is an ongoing live session TV show from longtime Radiohead producer/collaborator Nigel Godrich. Radiohead last featured on the series back in 2008 shortly after the release of previous album In Rainbows.

The most noticeable thing about Staircase is the addition of a second drummer - in the shape of former Portishead, Roni Size and Robert Plant drummer Clive Deamer. Whether this is a one off collaboration with the band or something more long-term remains to be seen.

The broadcast date for Radiohead's latest From The Basement session is yet to be announced, but we expect it will feature the band performing a considerable chunk of recent album The King Of Limbs. We suggest you keep an eye on the band's official site for more details.