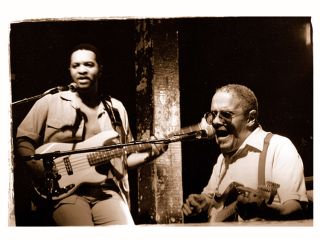 R&B singer and guitarist Ford 'Snooks' Eaglin, a legend on the New Orleans music scene, died 18 February. He was 72.

Eaglin was known for unique style of picking strings with his thumbnail and fingers. He played and recorded with a host of New Orleans luminaries, including Professor Longhair, the Wild Magnolias and pianist Allan Toussaint.

"He was a great, great player and singer who recorded on the streets of New Orleans. The variety of his repertoire was absolutely amazing, but that song Alberta was accessible to me as a beginning guitar player, because it consists of three chords and just straight strumming. It just lodged in my head as a very sentimental song, and part of my early influences."

Pianist Allan Toussaint was in a band with Eaglin, The Flamingos, when they were just 13.

"He played with a certain finger-style that was highly unusual," Toussaint remembered. "He was unlimited on the guitar. Folks would assume; I can do this or I can do that,' but Snooks wouldn't. There was nothing he couldn't do. It was extraordinary."