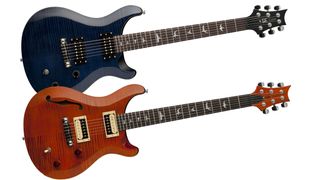 After creating a flurry of new models for its American-made S2 series, PRS hasn't forgotten about its cut-price SE line, either, adding the SE Custom 22 and SE Custom 22 Semi-Hollow to the Korean-made range.

The SE Custom 22 and SE Custom 22 Semi-Hollow are available from early September for £749 and £795 respectively. Check out PRS Guitars for more.