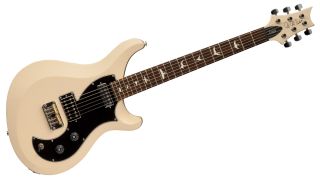 PRS has unveiled its new model, the S2 Vela. And the guitar looks like a bold move for the company, breaking a few traditions to reach out to new players.

For starters, its new offset body shape has more of a 'pawn shop' vibe than anything seen from the Maryland company before, with retro vibes even Mosrite fans might be attracted to.

And while its look may be more of no frills punk rock approach that bucks PRS's luxury traditions, the Vela's (RRP £1,199 / $1,699) spec offers real tonal versatility.

There's a new pickup combination on offer; a PRS Starla pickup in the bridge, providing what PRS call a 'bright, punky tone' and in the neck there's a new PRS design; the Type D single-coil.

That Starla bridge humbucker can also be split for single-coil tones and the plate-style bridge is a new design for PRS, who recently celebrated its 30th anniversary.