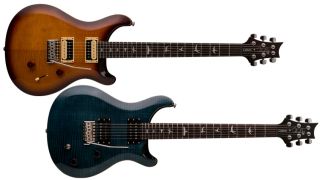 Since its introduction in 2001, PRS's SE line has grown to become one of the mid-priced guitar market's leading lights, and now, 16 years on, the company is giving it the most radical revamp yet.

Models receiving the revamp include the Custom 22 and 24, Santana, Tremonti, 'Floyd' Custom 24 and SE 277 Baritone.

For starters, the SE headstock will now feature Paul Reed Smith's signature with SE logo on the headstock, with the truss rod cover - a sign of "bold endorsement", says the company.

New pickups feature across the range, including the 85/15 'S', 245 'S', Tremonti 'S' and Santana 'S', which promise extended clarity and increased artist involvement.

Santana's SE model is also being updated with 24 frets and a new electronics layout, closer to the legendary guitarist's Core model.