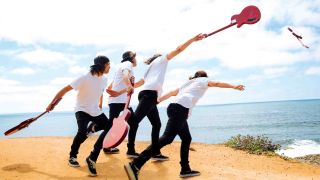 Earlier this year, James Bay put a signed Victory amp under the hammer to benefit the Teenage Cancer Trust, and now, American post-hardcore kings Pierce The Veil have followed in his footsteps, offering up a signed smashed guitar in aid of the charity.

PTV frontman Vic Fuentes threw the Epiphone Les Paul Special II off a cliff during a recent photoshoot - the remains were then signed by the band and donated to the Trust.

An enthusiastic Vic says: "I've always wanted to throw a guitar off of a cliff, so why not do it for a great cause like Teenage Cancer Trust?! This is something that means a lot to me personally and we are very proud to announce this fun collaboration with them. We hope that this auction helps spread awareness and love to those who truly need it."

You can bid on the guitar now on eBay - the auction ends on Sunday at 7pm GMT. Look out for more from Pierce The Veil on MusicRadar very soon.